The Accidental Pornographer and how it came about

You are here: Home / The Accidental Pornographer and how it came about 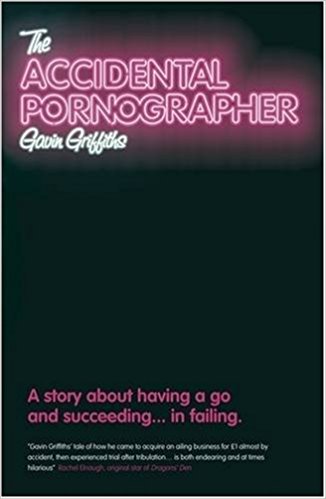 THE STORY BEHIND THE ACCIDENTAL PORNOGAPHER

I once met this woman who had started a wildly successful chain of coffee shops. This was shortly after launching my first publishing business, about 10 years ago, when I had fire in my belly. I would meet everyone I could. I’d just ring people out the blue that I liked the sound of and have coffee with them. I don’t know why I’m not like that now. The first internet bubble had burst but there was still an electric atmosphere in London, a feeling that you could do whatever you liked. I contacted this coffee shop woman who was bringing out a book called ‘Anyone Can Do it’. I had this idea for an entrepreneur magazine and thought she might want to get involved. A crap idea in hindsight but at the time magazine publishing was still a great business and I was into them. We talked for a while, there was some minor interest, and we went our separate ways, me clutching a copy of the book she had written. ‘Anyone Can Do It’ was a book about how straightforward it is to set up a 100 strong chain of coffee shops that turns over 30 million. She had done it with the help of her brother (an ex city broker) and her dad (a multi millionaire businessman), she herself was a highly motivated, intelligent, extremely attractive and charismatic ex lawyer. So after reading their own biography’s it was pretty clear that these people were special. I mean they were big hitters in the world of business and finance. I didn’t even finish it, thinking that these elite people were really pretty far from “anyone”. We weren’t dealing with your Mr average Joe Bloggs here.

Now fast forward 18 months from this meeting. The publishing business hadn’t worked out at all (you’ll need to read the book to find out more about this). So nursing a broken ego, at home with Katharine, my wife, and toddler Olivia, I decided to write the anti- success book. A book about how bloody hard it is. A book about what happens to those 1 in 3 businesses that doesn’t make it. Forget about all those Dragons Den folk, or Richard Branson. Business is full of failure yet nobody ever talks about it. I was going to do the opposite to ‘Anyone Can Do It’.

So I wrote three chapters, printed them off and send them off to 100 publishers. Every single one rejected it. Many didn’t even reply. After a year or so I was about ready to give up on the writing idea when, as is often the case, something serendipitously landed in my lap. I hadn’t hung around trying to make a life as an author and in the meantime I had launched a new business, a magazine called Scarlet Magazine, which was a sort of lads magazine for girls. It made quite a stir in London and one afternoon I had a call from a senior editor at Harper Collins who wanted to come and have lunch to see if there were any book ideas we could work on. So we had a few bottles of wine and threw about some thoughts and a book concept developed over the course of the afternoon. It was a book on the hundred best vibrators in the world, artistically photographed and heavily styled in a coffee table format. The concept was approved at the highest levels of Harpers and they signaled they wanted to move on and publish it. A book deal had landed on my lap. It was recommended by Sarah Hedley, famous editor of Scarlet and dear friend, that I find an agent to ensure I wasn’t getting shafted by this publishing Goliath, what with me being the gullible sort of David that I am. She suggested contacting her agent, Gordon Wise, of Curtis Brown. Gordon agreed to represent me in my negotiations with Harper Collins and so it was that I had found myself one of the best agents in the business. They had represented Charles Darwin with his little book Origin of The Species! You could never have planned this. Opportunity comes knocking at the most unlikeliest of times. He negotiated the deal for me and after it was put to bed I wasted no time in sending him my first three chapters of The Accidental Pornographer. I waited nervously for his feedback which took about a week. I was convinced the delay in reply was because he was finding a way to politely say it was rubbish. But it was the opposite. He thought it was a great idea. Within a month he had found a book deal with Wileys who went on to publish it in hard copy in 2008. I updated it and published the digital version myself in May 2012.

The experienced of getting published by a large publishing house is incredible. I was a special guest at the big book awards called the Nibbies and I got to sit at the same table as Anne Diamond. Another time I was wheeled out at The London Book Fair and plied with champagne. Wileys threw a huge party for me in Soho when the book was launched. It was like being a rock star for a few weeks. Then everything got back to normal and that was that. Like 99 out 100 books it wasn’t a best seller. It wasn’t made into a movie and the money it made never enabled me to become a full time author. I switched from publishing magazines to publishing websites and with the kids getting a older we left London and moved to Stratford upon Avon where I run a small digital publishing house.

This book is one of a handful of working endeavors that I’m really proud of. I haven’t found anything commercially as pure as someone paying money for something that has come from inside my head. You’ve purchased something that could only have existed because of me and it’s a very special relationship that you and I have. It sounds corny as hell saying it but every single sale is like a tiny victory – in my head I crack open a little bottle of champagne to celebrate, yay! Here’s to you!

Oh and one more thing. Writers love being contacted (unless you’re one of those mad reclusive writers like JD Salinger, which I’m not). If you have any questions on the book, or your business is going through the ringer or your business is going great guns or you want to know how to upload a book or just fancy saying hi then drop me a line. I would love to hear from you.